Whether it referred to fire or the devil, red hair always had an evil connotation during the Middle Ages: redheads were considered as sorcerers or witches, often persecuted and even sometimes burned. Today, red hair is attractive, mysterious, yet still troubling and never leaves anyone indifferent. For those who have this hair colour, it is either a source of hardship or a reason to surpass themselves but, no matter what, it shapes their character.
As a gesture of sympathy for the history attached to this minority and its difference, Geneviève Boutry has been photographing redheads for twenty years. Her troubling work is now enriched with reflections on the subject as well as testimonies by her models, which casts a new light on red hair by getting closer to those living with it.

Redheads, beyond the anecdotic details, infiltrate the writings of authors, and they come loaded with long held prejudices. The colour red is emblematic of a difference, sometimes infamous, sometimes laudatory. It singles out the individual and depersonalizes him/her. As if a person’s name had vanished,
his/her identity is decided by colour alone. The term “Carrot Head” somehow made the name of François Lepic disappear: the colour-loaded nickname eventually replaced the name and surname of this emblematic character created by Jules Renard.

Some parts of the human body are supposed to convey more meanings and values than others. The body cannot be conjugated in a singular manner and the values and meanings attributed to its components vary with both time and space. In that regard, since the Renaissance we have been familiar with the privilege granted to sexual parts, or the face. Today, to be disfigured or to be deprived of one’s sexual parts after an accident or an illness is considered a tragedy for the men and women who are victims of such situations. Our hair contributes to a sense of self but it is also rooted in the social imagination. In many human societies, both hair and body hair are a symbol of manliness.
For example, Samson lost all his strength after Delilah cut his hair. In China, to have one’s hair cut short was associated to a mutilation and had the social consequence of being denied access to certain types of employment. The Indians would scalp their victims to reinforce their power over them, and as a way of demonstrating their personal bravery.
Giving up one’s hair in some religious communities, notably in monasteries, is a sign of total dedication to God. Today, to lose one’s hair or to see it whiten with age is often a cause of grief: it is interpreted
as a sign of one’s mortality. Chemotherapy or radiotherapy treatments for cancer which cause hair loss are a tragic aspect of this illness, a temporary sacrifice – of course – but one nonetheless emphasizing
a feeling of decay. One’s sense of personal identity is put to the test, self-esteem is destroyed and one’s place in the world is compromised.

As a matter of fact, a red-haired woman is necessarily attractive to men because she is different from the norm, and it is evident that the opposite sex does not remain insensitive to this charm, which has been interpreted as a magic spell. The great painter Jean-Jacques Henner (1829-1905) had such a fascination for red-haired women that during his entire life he made them the focal point of almost all his paintings. He painted them as nymphs, goddesses or sophisticated ladies, and it seems that this obsession started in Rome in 1858 when he won first prize in the “Grand Prix de Rome” fora painting illustrating the theme of “Adam and Eve discovering the body of Abel”. The strange inspiration lasted until his death…This painter, who was considered as the last of the Romantics, painted only women with an opulent mass of hair as shiny as “sparkling flames”. The poet Baudelaire followed the same path and was also inspired by muses with “fiery burning hair”. In any case, he dedicated an ode of “Les Fleurs du Mal” to a “red-haired beggar-woman” whom he described in the following manner:

“Pale red-haired maiden,
Whose poverty and beauty
Can be seen through the holes
Of her rags

To me, wretched poet,
Your young frail body
Dotted with freckles
Offers its sweetness”

p. 8    Le regard de l’Autre… Préface de Valérie André
p. 14    The Gaze of the Other… Foreword from Valérie André 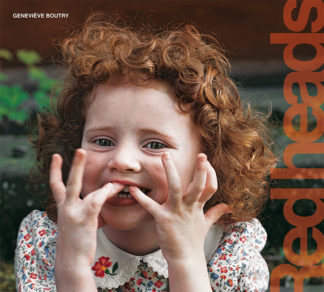